Thanks for the thoughtful and generous words, Al. I am especially honored to have you present this award to me. I am a little aware of your personal story, including your distinguished military career, and your accomplishments in the legal profession, most relevantly advancing diversity. It means a lot for me to receive this award from you.

Further thanks to those who nominated me, led by Michael Homans, Shelli Fedullo, Nikki Johnson-Huston, Tobey Oxholm, Dan Aiken, Larry Felzer and Sharon Lopez. I am so grateful to you.

I would be remiss if I did not thank Shelli a second time for appointing me as the Philadelphia Bar Association’s Chair of Diversity during her year as chancellor, and Chancellor Snyder, who reappointed me to that position this calendar year.

I am further grateful to my colleagues at the ACLU of Pennsylvania, who keep me on my toes and whose great work makes possible any recognition or commendations that I receive. Thanks also to the Barristers Association of Philadelphia, the best and most effective affinity group I have ever seen.

It means a lot to me to be receiving this award from my peers and through the Philadelphia Bar Association. I moved to Philadelphia just under 9 years ago not knowing very many people. I quickly became active in the Association, which welcomed me with open arms and made space for me at the table. The Association’s uniquely collaborative spirit is well known across the country, and its truly diverse leadership is a model for other professional associations. The Association helped ground me in Philadelphia and allowed me to gain my footing. 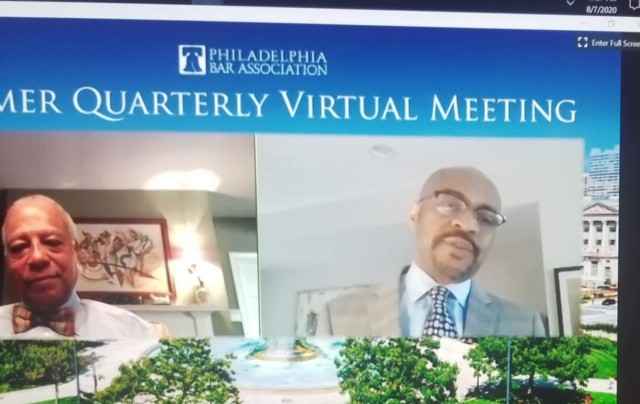 Following in the footsteps of prior recipients of this award, most notably its namesake, Justice Sonia Sotomayor, is no small challenge. Those are large shoes to fill. I am honored to be in the esteemed company of previous awardees and promise to do my best to earn this award every day.

I will admit to feeling a little sheepish about receiving an award for doing something so integral to who I am as a person. I was six years old when I decided I would become a lawyer. I was an inquisitive kid. Whenever we would get visitors to our house, I would pepper them with questions: What’s your favorite color? Do you like to read? Do you have brothers and sisters? Do you get along with them? Does your dad live with you? More than one adult said, “Whoa! Slow down, kid, you sound like a lawyer.” And that was my aha moment.

Of course, growing up on public assistance as the middle of five children of a single mother, who had her first child at age 15 and was forced to drop out of school, no matter how smart she was, I did not know any lawyers. But that did not stop me. As I got older and observed the social dynamics of racism, discrimination, sexism, classism and the lack of opportunity faced by my mother, relatives and others who looked like, I decided my career as a lawyer would be dedicated to fighting all of those things I observed or experienced growing up. It is an embarrassment of riches to be receiving an award for this work that means so much to me on a personal level. I am not giving it back, though!

Justice Sotomayor herself has praised the value of diversity. She has said:

“When people walk into a system and [they] don’t see anybody who looks like [them], it undermines confidence in that system. Every justice comes from an Ivy League school — that affects our policy choices.”

I am not so bold as to disagree with our esteemed Justice Sotomayor, but I would push this further. I think diversity is just the beginning; it is the bare minimum. I have, in fact, coined an acronym that I believe captures the values to which we should aspire in our workplaces: A-B-I-D-E (ABIDE): Authentic Belonging, Inclusion, Diversity and Equity. Everybody likes a party, right? Here’s metaphor to demonstrate how I think about these issues:

Diversity is being invited to the party. Inclusion is being asked the kind of music you like. Equity is having the music you like be played. Belonging is being asked to help plan the whole party or at least getting your ideas beforehand about what a fun party would look like. At the end of the day, everybody wants to belong.

As the first person in her family to attend college, like me, Justice Sotomayor has said she sometimes felt ostracized because of her identity.

“The first four years of Princeton felt like I didn’t belong, and not fitting in has followed me to the Supreme Court,” she said. “What I have to remind myself every day is I may not belong 100 percent, but I’m here. They have to deal with me.”

To me, these values extend beyond the workplace. What kind of communities, what kind of society do we want?

What a year we are having! 2020 is taking no prisoners. It has been relentless. We are experiencing simultaneously the twin pandemics of the novel coronavirus and the longstanding — certainly not novel — issue of police brutality and racist vigilantism that has long defined American culture. COVID 1619, if you will. The pandemic has been clarifying. We see more clearly the very shaky foundations on which many of our institutions exist and their failure to protect and provide for its citizens equally. Those who are contracting and dying from the disease disproportionately are Black and brown people, deemed “essential workers” probably for the first time ever. And Black people also are continuing to die at the hands of the police and would-be vigilantes. George Floyd, Breonna Taylor, Ahmaud Arbery, Elijah McClain, to name just a few. But it’s important to say their names. Black Lives Matter.

If there is a silver lining, it is that more people than ever seem to be paying attention in a meaningful way, more diverse people are taking to the street, more uncomfortable conversations are happening across race. In order to make real change, Bryan Stevenson says we need truth and reconciliation and that truth must come before reconciliation is possible.

In a moment of candor, in the midst of one such uncomfortable conversation, a fellow board member, an older white man, admitted that he struggled with and somewhat resisted the concept of white privilege. My response was two-fold. I first quoted a saying I had recently heard that, “We are not saying your life has not been hard. We are only saying that it has not been hard because you are white.”

Again, by any measure, 2020 has been hard. Another of our favorite justices, Ruth Bader Ginsburg, is battling a recurrence of cancer. And we recently lost a singular American icon, John Lewis. But John Lewis would ask us not to lose hope. He said:

“Do not get lost in a sea of despair. Be hopeful, be optimistic. Our struggle is not the struggle of a day, a week, a month, or a year, it is the struggle of a lifetime. Never, ever be afraid to make some noise and get in good trouble, necessary trouble.”

Mom, this one’s for you.

Thank you so much.

Broken Rules: How Pennsylvania Courts Use Cash Bail to Incarcerate...

Banned Books at Central York and the Students Who Fought It

What a Mayor Ed Gainey could mean for Pittsburgh