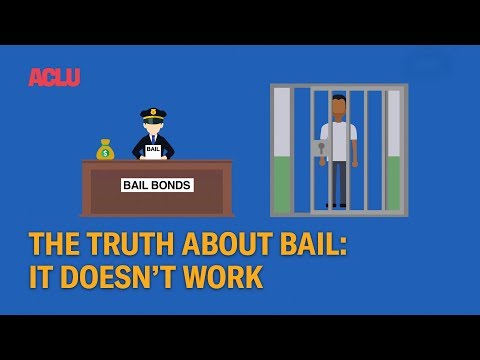 Jailing people because they can not afford to post money bail amounts to wealth-based detention that violates well-established norms of fairness and constitutional principles.
‍
One of the most basic principles underlying our criminal justice system is the presumption of innocence: that one is “innocent until proven guilty.” Keeping people in jail solely because of their poverty before they have been found guilty of any offense flips this fundamental presumption on its head.
‍
Cash bail allows people with financial means to purchase their freedom, while those without cash remain incarcerated. Freedom from incarceration should not depend on one’s wealth.

The United States is one of only two nations in the world that use cash bail; the other is the Philippines. Most other common law countries criminalize the practice of requiring money in exchange for pretrial liberty.

Nationwide, 62 percent of people held in jail have not been sentenced, the majority of these people, who should be presumed innocent, are held because they cannot pay cash bail. The United States has more people -- 526,000 -- detained pretrial than most countries have in their jails and prisons combined. In the past three decades, both the use of cash bail and the amount of money assigned as bail has risen steeply.

Pennsylvania has also seen a steep rise in the number of people incarcerated pre-trial.

Cash bail has devastating impacts on individuals, families, and communities

A 2016 report found that in Pennsylvania across all offenses black defendants are more likely to receive a monetary bail decision especially when charged with a weapons offense; 33 percent of white defendants charged with felony weapons offense were assigned cash bail compared with 78 percent of black defendants charged with similar offenses.
‍
A study of large urban counties across the US, found that judges are more likely to assign unaffordable bail to black defendants than white. Moreover, the odds of being detained pretrial were twice as high for Latinx than whites and 87 percent higher for blacks than whites.
‍
People of color (especially Black, Latino, and Native American people) are at a higher risk of becoming involved in the justice system, including living under heightened police surveillance and being at higher risk for arrest. This imbalance cannot be accounted for by disparate involvement in illegal activity, and it grows at each stage in the justice system, beginning with initial law enforcement contact and increasing at subsequent stages such as pretrial detention.

The Risk Assessment Instruments used in determining whether an individual should be detained pretrial or given bail is steeped in racially biased data that too often conflates character with risk, while failing to deliver meaningful pretrial recommendations. In fact, a University of Pittsburgh Institute of Politics study found that, in Allegheny County, judges only use the recommendations from the Risk Assessment Instruments about 60% of the time.

As with sentencing, Risk Assessment algorithms cannot replace the individual decisions that a judge makes per case.

Assigning cash bail makes our communities more dangerous. Multiple studies have documented the way in which cash bail and pretrial detention undermine public safety.
‍
A large study of cash bail in Philadelphia and Pittsburgh found that assigning cash bail to a defendant increases the likelihood of recidivism by 6-9%.

A 2016 study of people charged with misdemeanors in Harris County, Texas (Houston), found that pretrial detention was associated with a 30 percent increase in felonies and 20 percent increase in misdemeanors within 18 months of the initial bail hearing.
‍
Another study found that when low-risk defendants were held for 8-14 days, they were 51% more likely to commit another crime than equivalent defendants held less than 24 hours. When detained for even 2-3 days on bail, low risk defendants were 40% more likely to commit new crimes than equivalent defendants held no more than 24 hours.
‍
These studies demonstrate the profound destabilizing impact of incarceration on individuals.
‍
In addition to increasing recidivism, cash bail may not actually be that effective at getting people to come to court, the main purpose for its existence. One study that examined bail and court appearance rates in Pittsburgh and Philadelphia found no evidence that money bail increased the probability of appearance. Another study demonstrated that release on unsecured bonds, (bonds that allow for defendant’s immediate release and threaten monetary bail only if the defendant fails to appear at a future court date) was slightly more effective in getting people to appear in court than assigning money bail.

Pretrial detention increases the likelihood of conviction and the length of sentences. Cash bail that results in pretrial detention poses a particular threat to innocent people because it induces them to plead guilty in exchange for their liberty. Pretrial detention is directly correlated to an increase in guilty pleas, as those who are detained pretrial are far more likely to accept guilty pleas than those who who have their liberty.
‍
In an analysis of data from 1990 to 2004 from the 75 largest counties in the nation, the Bureau of Justice Statistics found that 60 percent of released defendants were eventually convicted compared to 78 percent of detained defendants. In Brooklyn in 2013, 62 percent of defendants charged with a misdemeanor who remained in jail were convicted, compared to only 12 percent who made bail. Another study that looked at Pittsburgh and Philadelphia estimated that the assignment of cash bail caused a 12 percent rise in the likelihood of conviction.
‍
A 2012 study that looked at 10 years of data from New York found that even controlling for other factors, pretrial detention was the single greatest predictor of conviction.

Many jurisdictions in the United States reject cash bail

In addition to statewide reform, many counties and cities have also moved away from this practice, including: Atlanta City, Harris County, Texas, and Jackson, Mississippi. The district attorneys in Richmond Virginia, Philadelphia, San Francisco, Brooklyn, Manhattan, and Middlesex Connecticut, have declared their intention to stop requesting monetary bail for certain offenses.

Other methods may be more effective than cash bail at getting people to come to court: