The ACLU of Pennsylvania is supporting legislation to modernize the commonwealth’s election laws, and that bill, Senate Bill 421, is expected to be considered by the state House this week. Because there has been a fair amount of controversy about the bill among legislators and advocates who often agree with each other, I want to explain how we reached our conclusion.

Whenever the ACLU determines what position to take on a voting rights issue, we ask ourselves a key question: Does this create or diminish structural barriers to voting? If a legal change or government action creates a barrier, we oppose it. If it diminishes a barrier to the ballot, we support it. If it does neither, we take no position.

Which brings us to the bill that is before the state House right now. SB 421 would be the most significant election reform in Pennsylvania in several decades. Consider what’s in the bill:

The House is also expected to amend the bill to appropriate $90 million for the counties to upgrade their voting machines to include a paper trail. This is an important security measure that will confirm for voters that their ballot was counted as they intended.

The ACLU of Pennsylvania’s support for vote-by-mail, or what is sometimes called no-excuse absentee voting, dates back at least a decade, to when we supported legislation offered by then-Representative Babette Josephs to advance that reform. Voting by mail will be a boon for working people with unpredictable schedules and for people with disabilities who face challenges in physically getting to the polls on Election Day.

And we are in court right now challenging Pennsylvania’s current absentee ballot deadline, arguing that it is unconstitutional under the state constitution’s voting rights and equal protection provisions. Election data reported by the media and gathered by our lawyers indicates that, in every election, thousands of absentee voters don’t have their ballots counted because of this early deadline. The current deadline is a structural barrier to voting, and SB 421 will diminish that barrier by extending the deadline. Our clients are nine voters whose absentee ballots were not counted in the 2018 election, including an emergency medical technician, several students who attend school out of state, a journalist, and Casey Adams Jones, a public relations professional who frequently travels and is not home on Election Day. 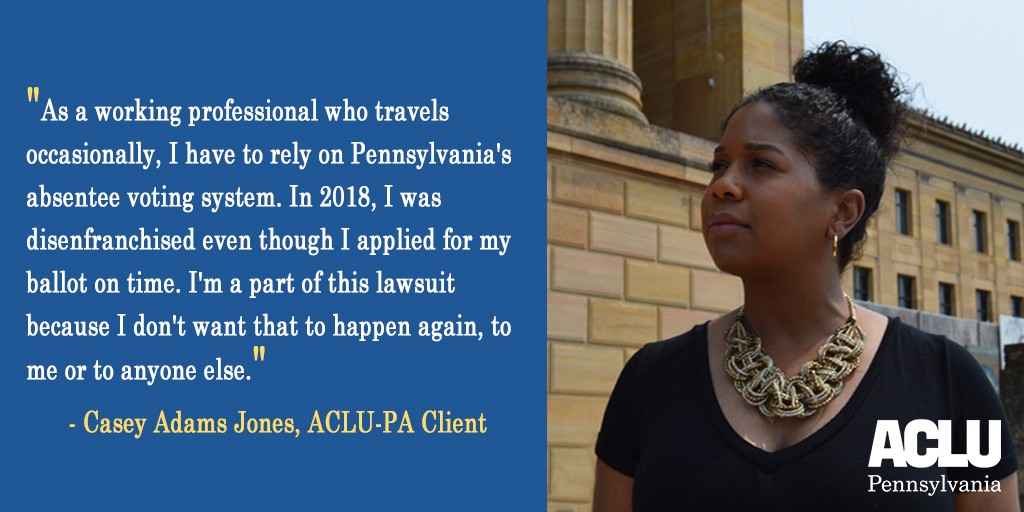 To be clear, we are certainly aware of the controversy over another provision in the bill that will eliminate the straight party voting option. When advocates and legislators raise the spectre of voter suppression, we take that seriously.

But, in our analysis, eliminating the straight party voting option neither creates a barrier to voting nor diminishes one, and, thus, we have no position on that issue. No one will lose the right to vote or face greater hurdles to voting because of the elimination of straight party voting. While Pennsylvania’s voters may be accustomed to having the option to vote for all candidates from one party with a single push of a button, it is reasonable to expect that voters will adapt and vote based on the ballot that is in front of them.

Straight party voting is not common, in fact; Pennsylvania is one of just nine states that have it. The others are Alabama, Indiana, Kentucky, Michigan, Oklahoma, South Carolina, Texas, and Utah.

We truly understand the passions on both sides of this bill. At the ACLU of Pennsylvania, we determined that Senate Bill 421 will eliminate barriers to the ballot for thousands of the commonwealth’s citizens. And that’s why we’re asking state representatives and senators to vote “yes” on this bill.